You inch your body alongside the wall, right hand forward, to avoid bumping in to anything that would give you away. It's almost completely dark inside save for a dim light emanating from the kitchen. A sudden CLANG startles you and you find your right hand clutching at your heart, trying to muffle the sound of it beating wildly inside of your chest. A metallic smell reaches your nostrils and coats your tongue as you inch toward the room. You pause as you sidle up to the doorway, having forgotten how to breath. Your right foot slides quietly forward as you peer in to catch a glimpse of the infamous Bloody Butcher. 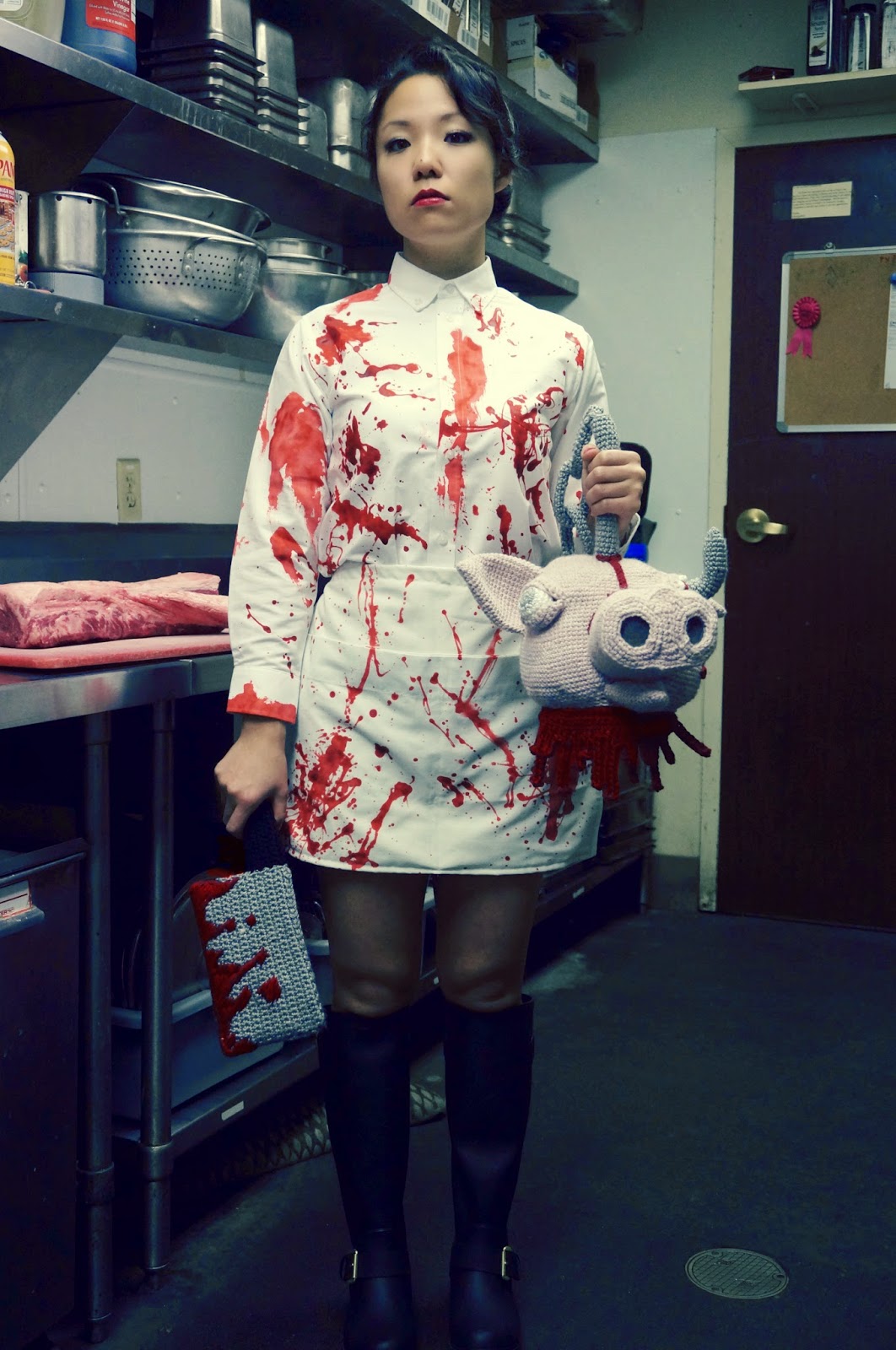 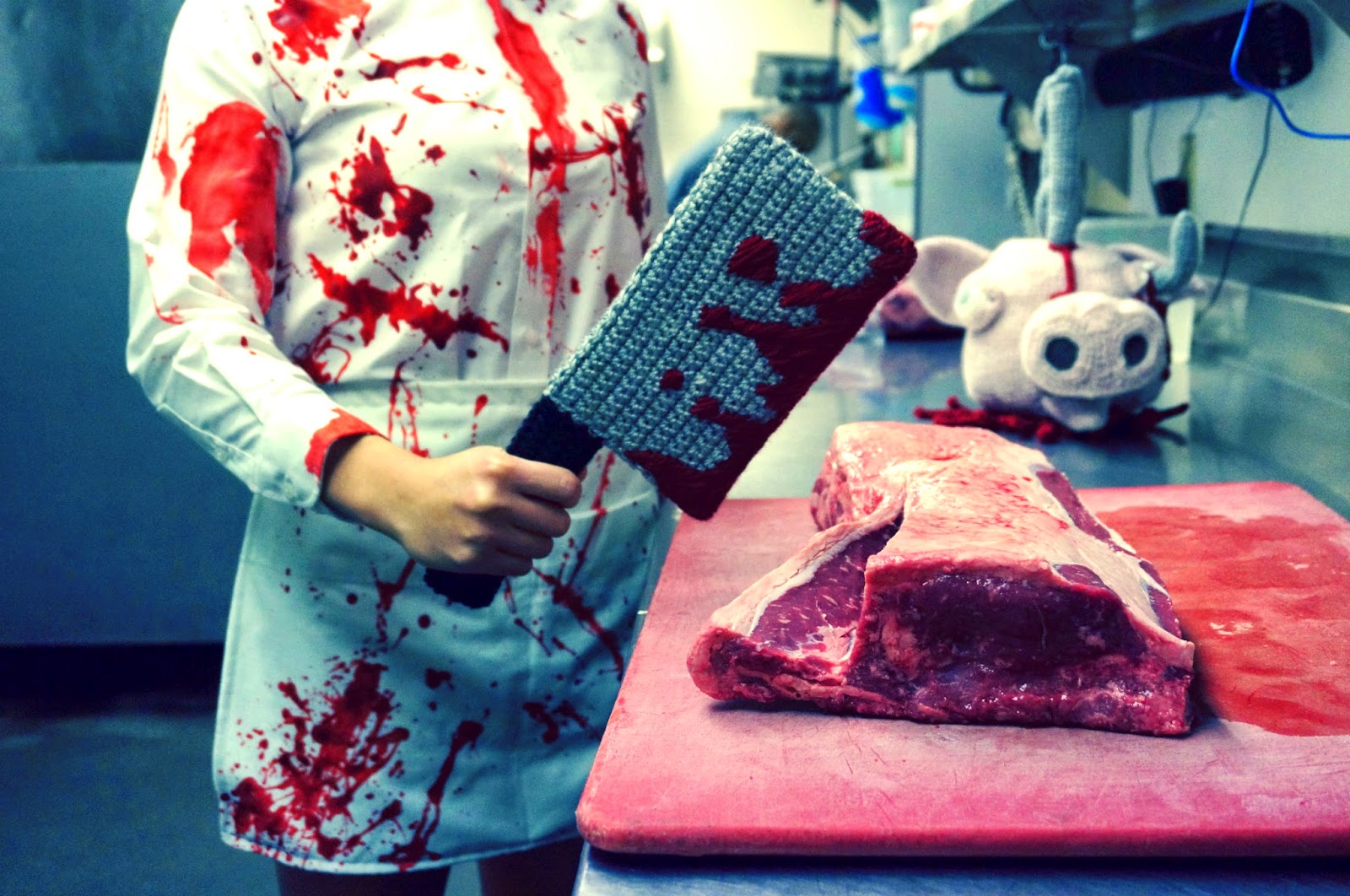 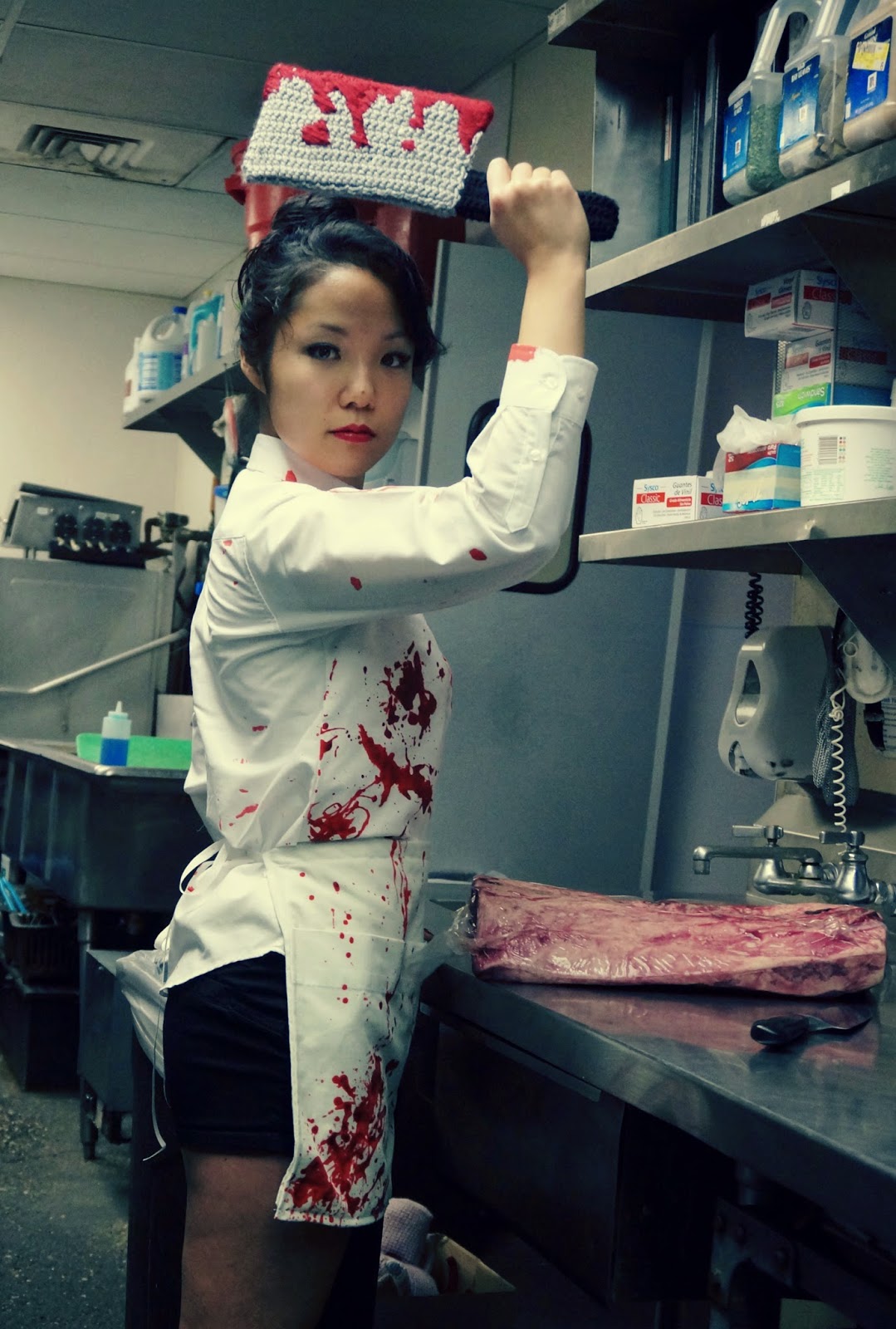 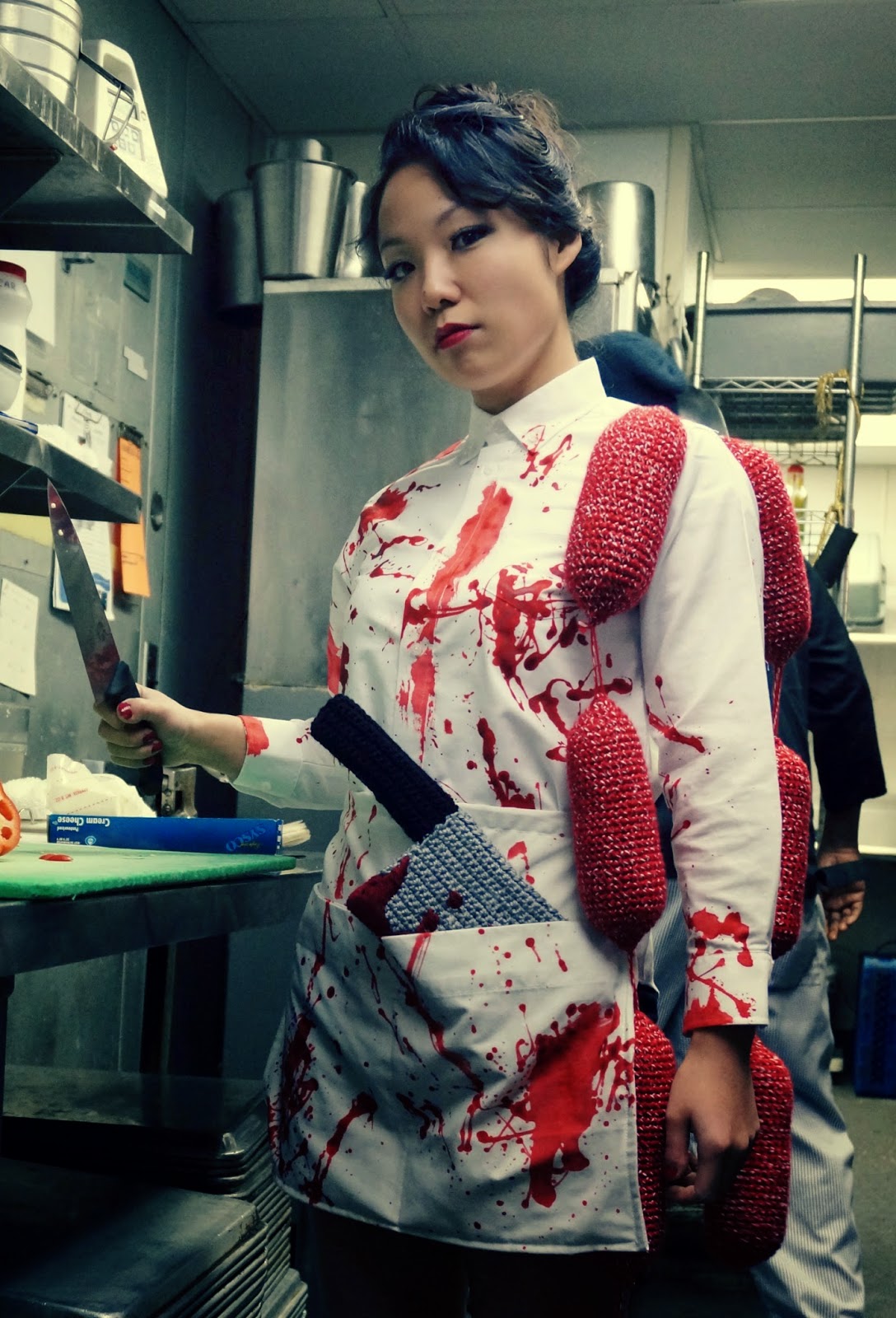 Process:
Intimidation kept me from attempting to crochet the bloody butcher costume with a decapitated pig’s head purse in 2013. I instead ended up creating the Crocheted Crab Costume with Backpack. Again, I felt the same trepidation this year as Halloween approached. I had never before crocheted something so intricate, large, and realistic, but I was massively intrigued by the prospect of creating a gruesome scene out of soft, fluffy yarn as I had done so before on a smaller scale with the Meat: A Recurring Nightmare scene. I decided to ditch the pig head idea and instead crochet a t-bone steak purse. As I sat on my couch looking at the red and white yarn, preparing to crochet the steak, I knew it wouldn't suffice. I needed a challenge. I needed to push myself beyond my comfort zone to see what my hands could create. 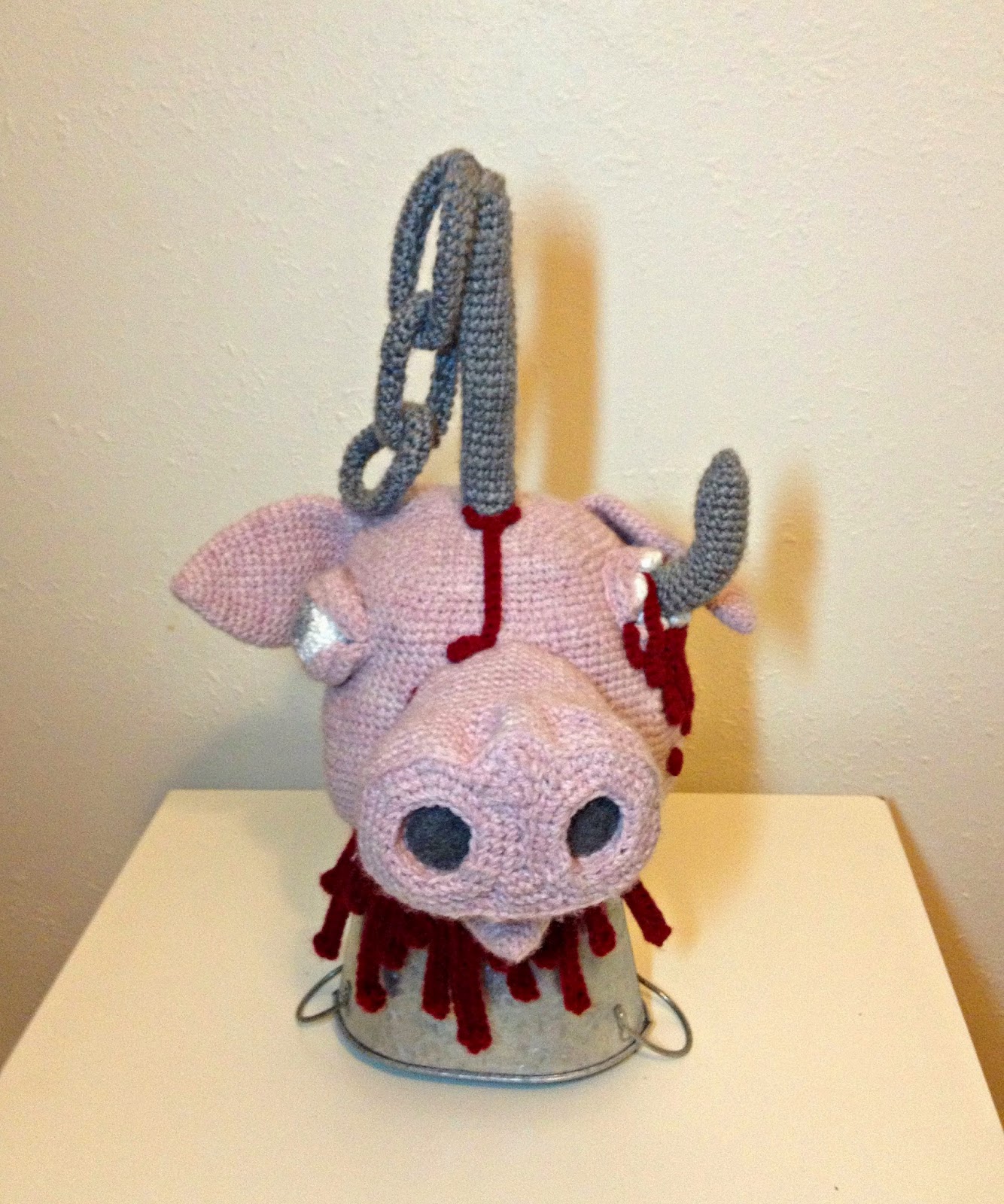 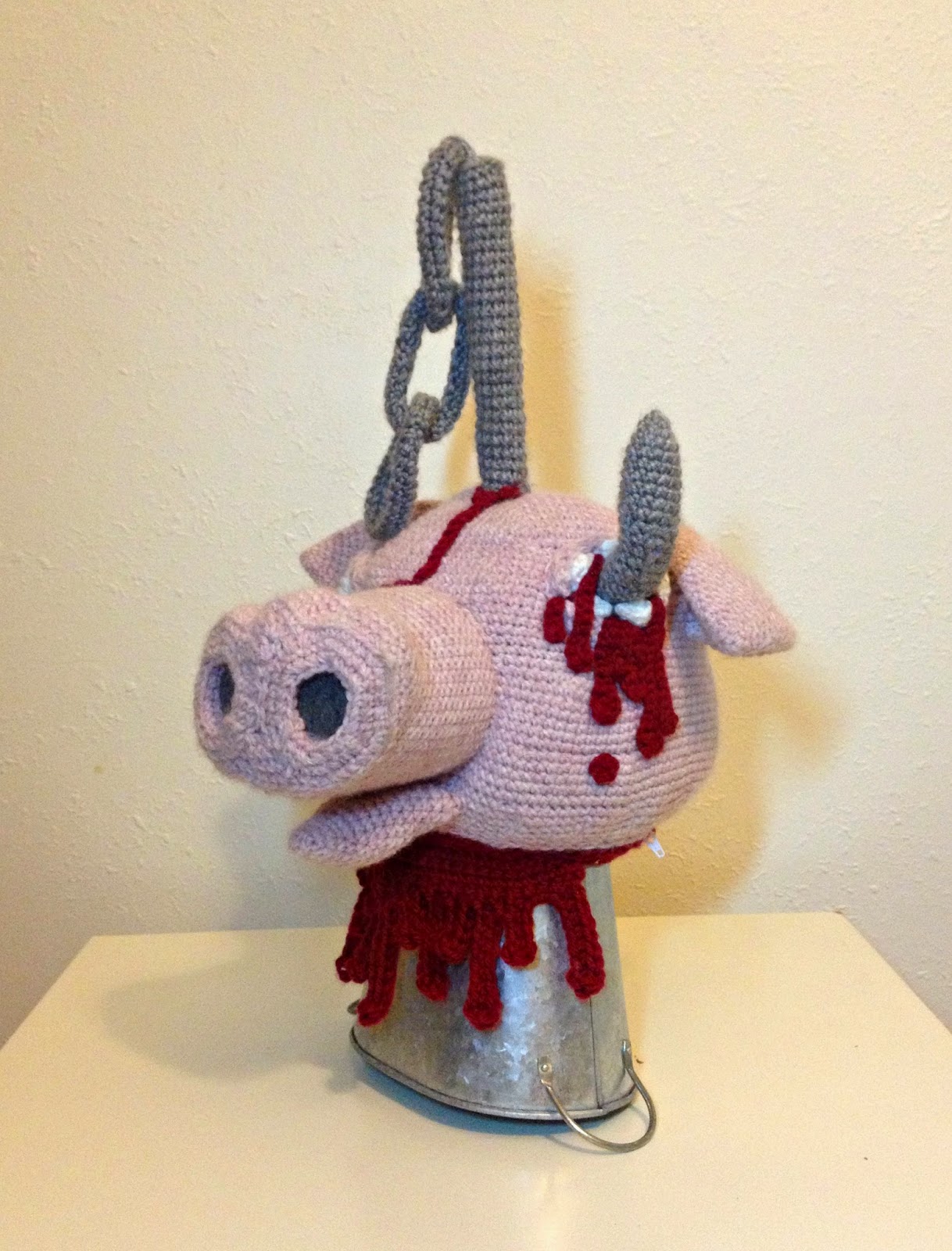 As I began to form the basic shape of the head, I was flooded with ideas to make it as realistic and creepy as possible. I needed a way to hold on to the purse without having to cradle it in my arm all night. A “metal” J-hook stabbed in through the top of the head and out the eye would do, with metal links to hook it up to the ceiling of a butcher shop. The hook is stabilized with a wooden rod and the head's roundness is kept in place from the inside by recycled paperboard and duct-tape. The pupil of the eye would be a silvery hue, to signify death and preservation in a cooler or freezer. The eye would be rolled up, as if that were his last move after he was decapitated by my cleaver. One ear would be folded over, so both sides of the face weren’t symmetrical. I sewed a zipper in to the bottom of the neck on the back of the head to hold small items. The blood dripping from the neck would show that I had just decapitated the head from the rest of the carcass. The butcher’s knife needed blood, and I played with crocheting drops and drips of red to see what it would look like against the gray. I ended up embroidering the yarn directly on to the cleaver to make it look more realistic. I wanted to wear the sausages around my neck, but I had crocheted them too large and it would sit awkwardly on my shoulders. They were to dangle off of my left shoulder throughout the whole weekend. My apron is fashioned from a pillowcase found at the thrift store that I quickly cut and sewed to suit my needs. 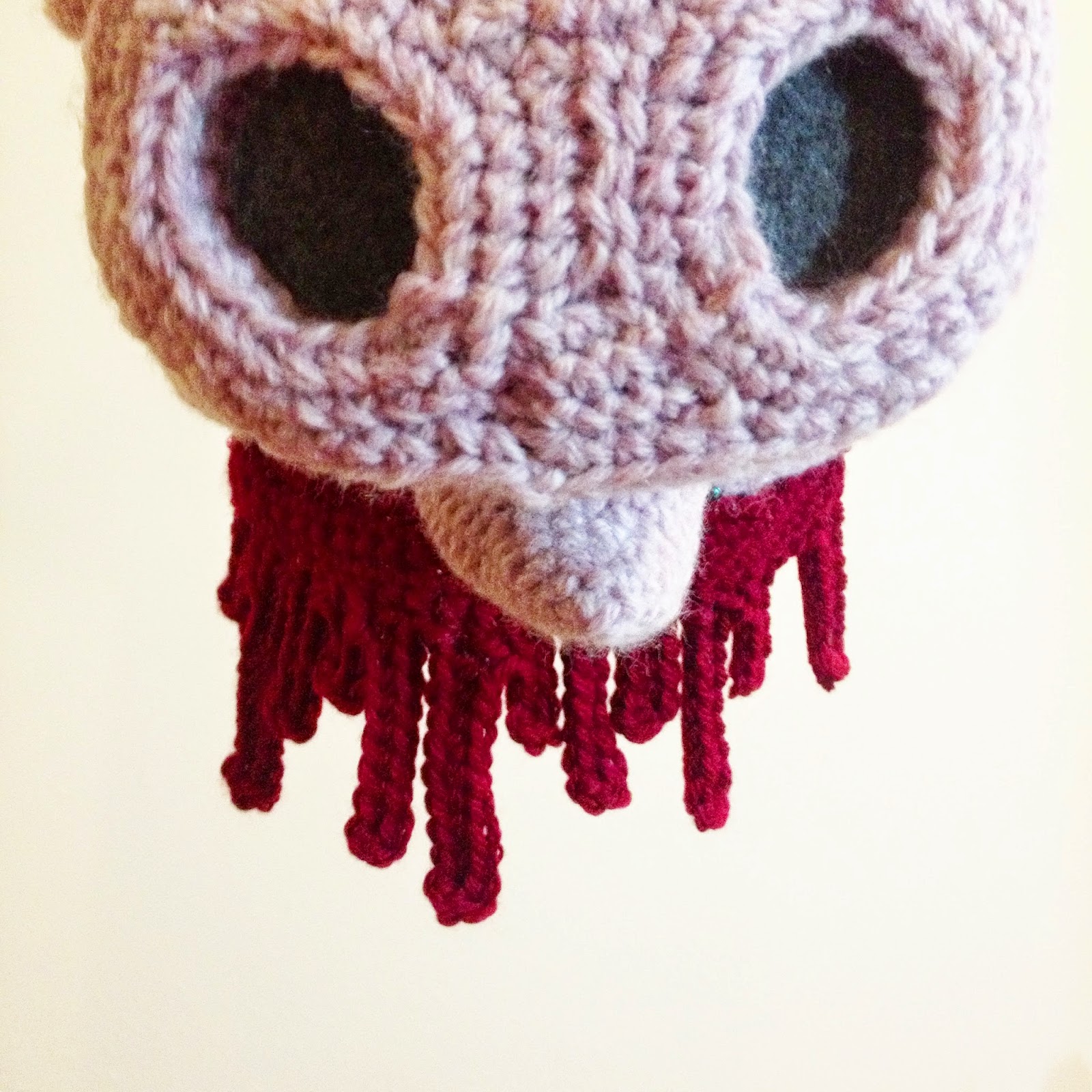 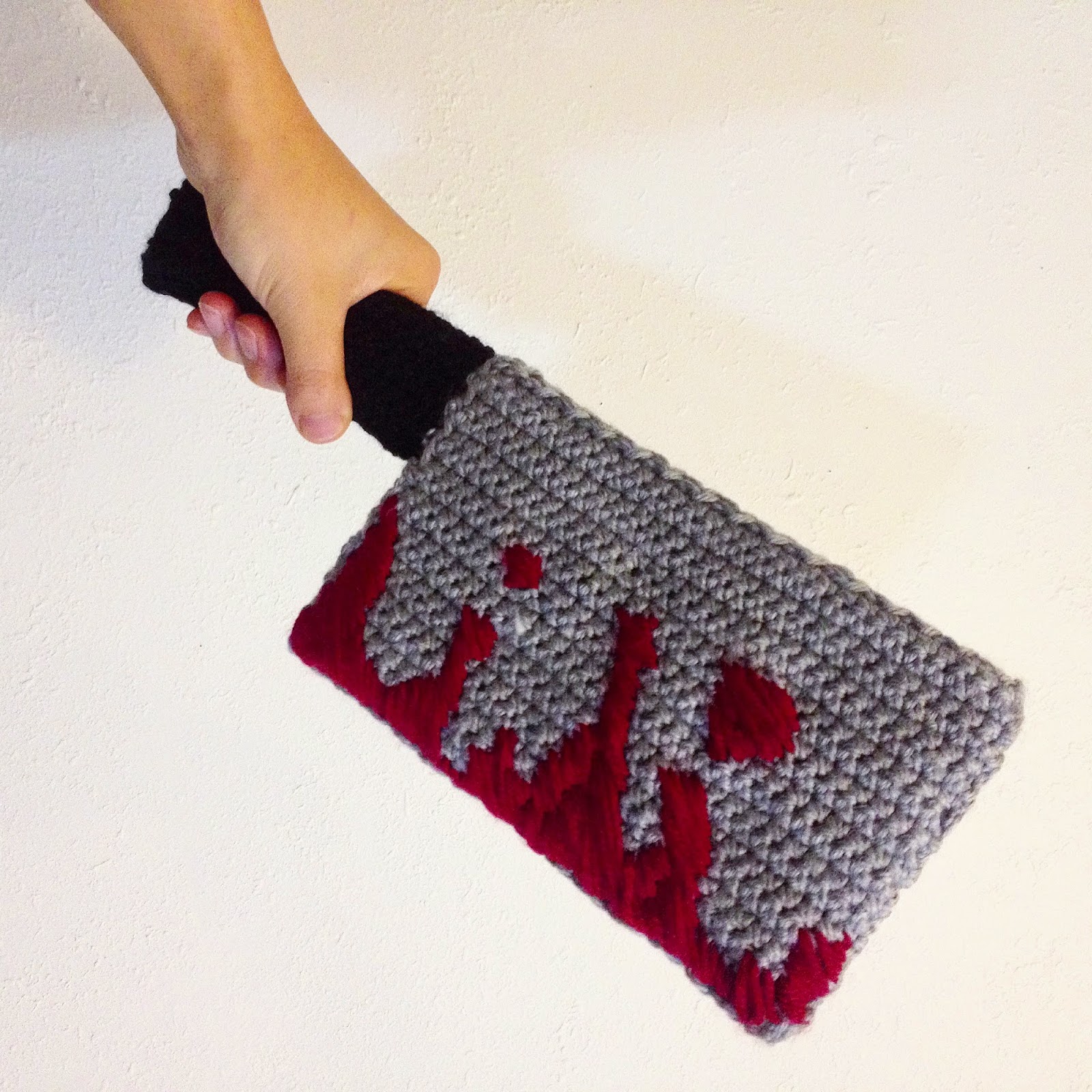 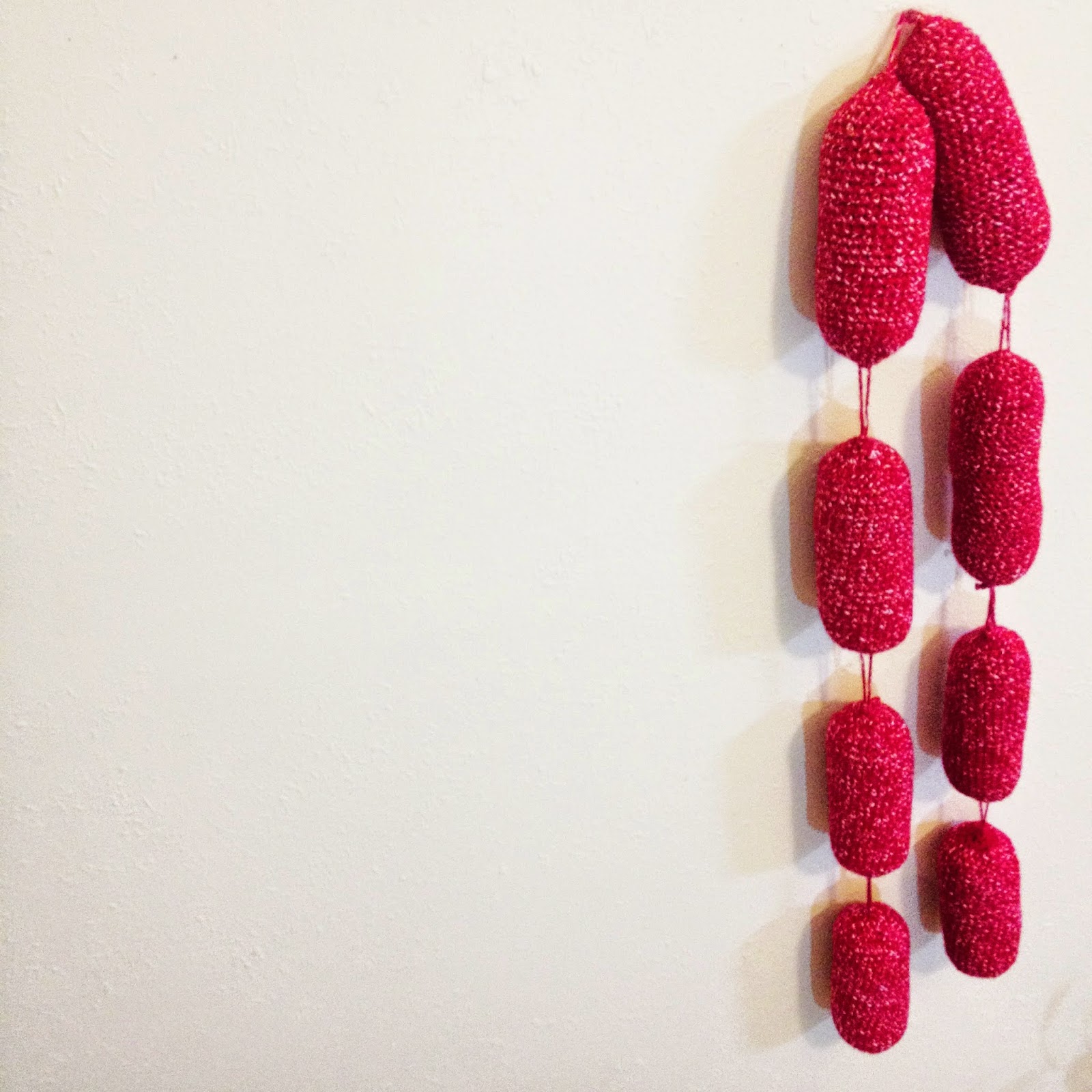 An industrial kitchen setting was the only thing left to complete the scene. I decided to ask Arlette and Kathy Lavelle of Lavelle’s Bistro if there was any possibility I could sneak in to their kitchen to take photos before they opened to the public. Surprisingly and gratefully, they said yes! My friend Sara borrowed a nice DSLR camera from her girlfriend Lou so that we didn’t have to use our iPhones. The cooks were highly amused and enthusiastic, inviting us in to the cooler, pulling out slabs of meat and various knives. We were careful not to touch anything inside the kitchen to keep things sanitary. I am thankful for all involved and the encouragement that I received before, during, and after the creation of the costume, especially from Sara, Melodee, Lou, and Heather. Without their belief in my abilities and willingness to listen to my ideas, I may never have attempted to crochet a pig’s head, let alone the whole costume. I hope you enjoyed the photos as much as I enjoyed taking them! If you have any questions or for inquiries, please contact me at iheartamicute@gmail.com.

it's very smoky here in alaska...

Nanae Ito
Fairbanks, Alaska, United States
Living, laughing, and creating in Alaska. This is my space to show the world what my brain comes up with and what my hands bring to life. I hope you love my creations as much as I enjoy making them ♥ Email me for inquiries: iheartamicute@gmail.com 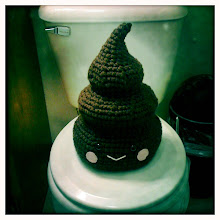 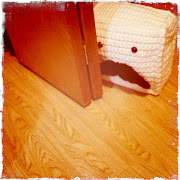 the vegan voyeur: he's watching you... not eat meat 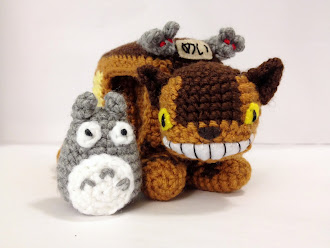 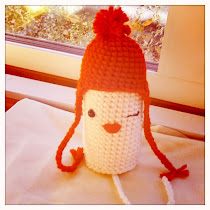 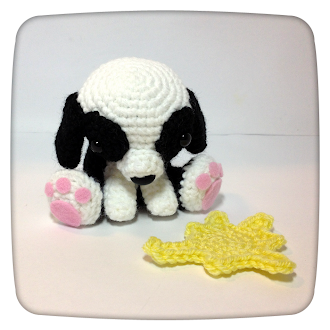 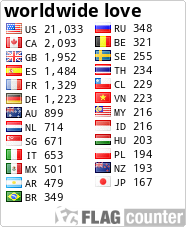 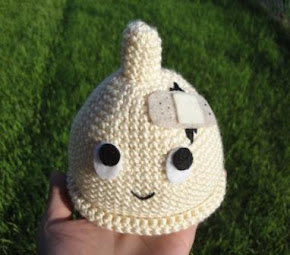 looking for something specific? 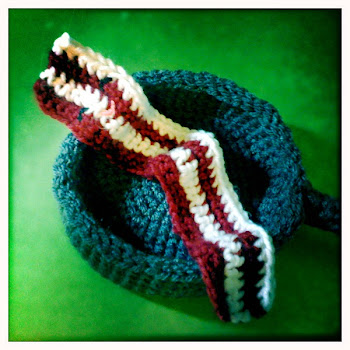 pick of the week: etsy crafter 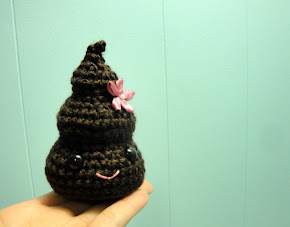 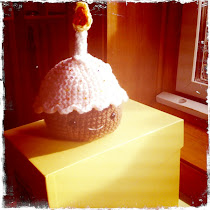 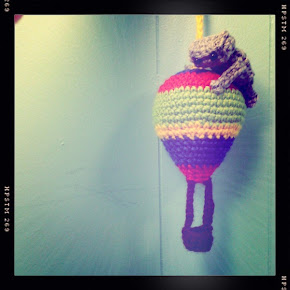 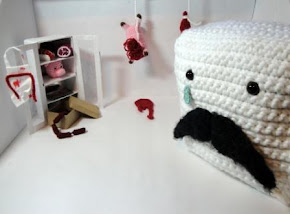 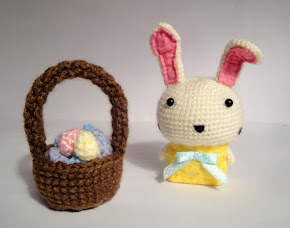 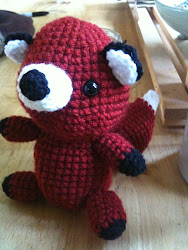 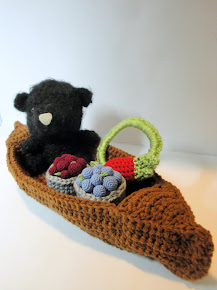 a bale of turtles 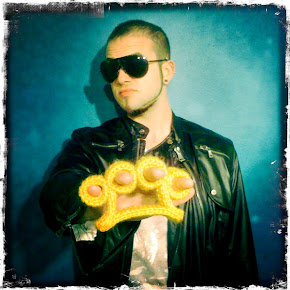